The Connector Role is an in-progress, early-stage prototype that aims to learn about how we can support more authentic connections between street-involved Edmontonians and the rest of the community, as one part of the city’s journey to greater urban wellbeing for all of its citizens.

Wellbeing looks like a lot of different things, but it is grounded in connection to culture, spirituality, self, environment, the greater human project, and friends, family and community. Edmontonians who are marginalized are more likely to have faced trauma and have unresolved grief, and all those things can keep us from forming healthy connections. That means the Connector Role is really about equity: forging ties between marginalized Edmontonians and the rest of the community to access healing and create the conditions for wellbeing.

Has ever there been more license to experiment with ways to build truly resilient and just communities? The spring of 2020 has exposed the costs of our societal inattention to disconnection and inequity. It’s brought us to a powerful moment: the strange storm of a global pandemic intersecting with multiple events of racialized and institutionalized violence has reached the hearts of even those more accustomed to a sense of security. The need to rethink how we operate as communities, how we support each other’s safety, informally, and through our systems, has resonated.

The Connector prototype is one way to learn about how else we might operate: how we can build capacity to experience our own discomfort and reach out to those in pain; how we can attend to our non-material needs for meaning, intimacy, and belonging without getting lost in our necessary, but ultimately insufficient needs for food, housing, and other material goods; and how we can demand that our systems and institutions reflect the interdependent nature of community, and not the falsity of brittle and tired hierarchies.

But the Connector Prototype is only one way, and we will need many. We are looking outward to individuals and groups that share our values, with the hope that in cooperation we can realize many alternatives to the weaknesses of the status quo. Get in touch!

This initial nine-month process will culminate in products showing what we’ve learned about how a Connector Role could increase the well-being of street-involved people experiencing cyclical crisis.

We learned about pain points experienced by street-involved adults over four rounds of ethnographic research on the streets of Edmonton between December 2017 and October 2019. A common thread through fifty-nine people’s stories was that of unresolved grief, loss, and trauma that fueled cycles of crisis. Too many people on the streets craved reconnection to past skills, belief communities, cultural practice, loved ones, and roles but really struggled to be able to make or sustain those connections.

Subsequently, we dove into the literature on healing and well-being and learned about the lost art of creating space to acknowledge grief and loss within our communities and how our failure to do so means that those dogged by grief, loss, and trauma are more likely to remain disconnected – unable to achieve a sense of well-being.

Four big ideas from our research are fuelling the Connector Prototype:

Connection to culture, the sacred, self and body, the land/ground, the human project, and family, friends, and community.

Healing from trauma, grief, and loss is a personal as well as a social process. Communities need to hold space for, and acknowledge the pain of abuse and loss before those suffering can reconnect with the world, and flourish.

Housing, food, and clothing are important, but they are not more important than connection. Systems that provide for material needs without making every interaction an opportunity for people to find healing and develop the six types of connection, are the stickiest systems. Disconnection perpetuates crisis.

Cultural tools of change need to be in our toolkit if our job is to forge, nurture, and sustain connections at an urban scale; discrete programs are not enough. Cultural tools include stuff like storytelling, laws, recognized knowledge, routines, roles, and settings. All of these are levers of change at our disposal. 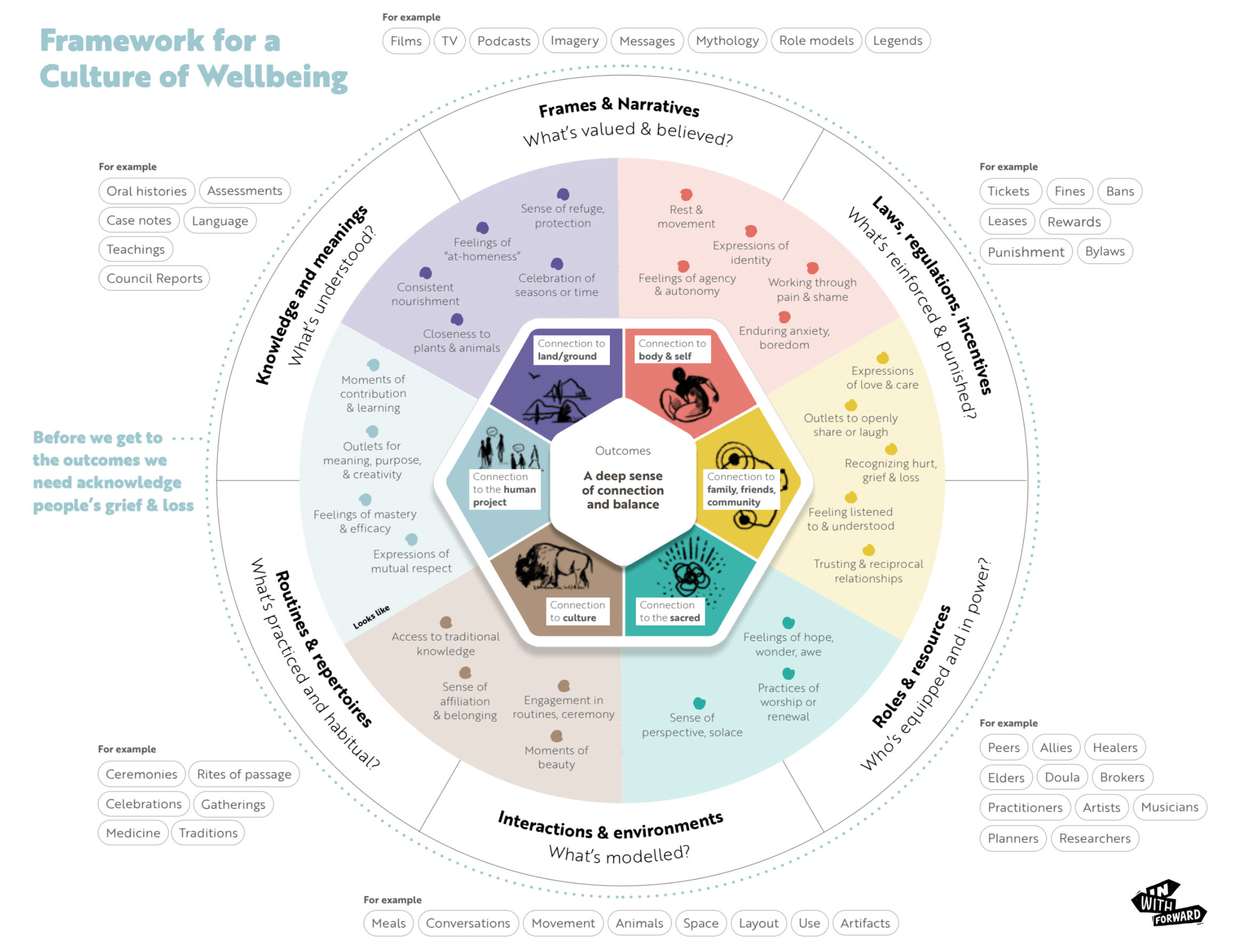 Prototyping during a pandemic at first appeared to our team as a difficult and unwelcome challenge. Prototyping typically involves recruiting people to work closely with us to imagine and create in iterative rounds of testing. We see it as an opportunity to build relationships that will see the work through. The Connector Prototype is built on research that started with street-involved people, whose access to internet is dicey at best and totally dependent on services like libraries, or the stray signals of open businesses. So going virtual didn’t seem like a realistic proposition during COVID-19.
As it’s transpired, our first phase of prototyping will engage non-street-involved Edmontonians.

Nearing the end of our ‘inspiration’ phase of the research, we’ve come up with a series of versions of what the Connector Role might be and do. All draw heavily on the human assets of the broader community. In fact, the willingness of community members to engage is such a lynch pin, that we knew we had to start prototyping with this demographic: working and middle class Edmontonians who see value in experimenting with new behaviours that could lead to more inclusive and connected communities. That is, communities that have the capacity to foresee and prevent crisis, or address it early on, and hold space for healing.

The Connector Prototype is being developed by IWF and REACH Edmonton, with support from the City of Edmonton and the Edmonton Police Service. It is part of a broader approach to well-being led by the City of Edmonton . Learn more about Recover: Edmonton’s Urban Wellness Plan here.

Between December 2017 and the present, over sixty adults living rough, precariously, or in assisted housing in Edmonton have spent time with our team and generously shared their experiences, ideas, and insights into what well-being means on and off the streets. These individuals have influenced us on a personal level as well as the work and we thank them for their wisdom and vulnerability. We look forward to re-engaging people to learn more about what works, when, how, and for whom during prototyping.

The team behind the Connector Prototype is Hayley, Jaime, Jane, Madeleine, Clarence, Natalie, and Sarah.

The Connector Role Prototype – One Pager

Explore three versions of the connector

Read the research behind the role: